The I-110 homeless camp is gone, but work goes on to find former residents permanent homes 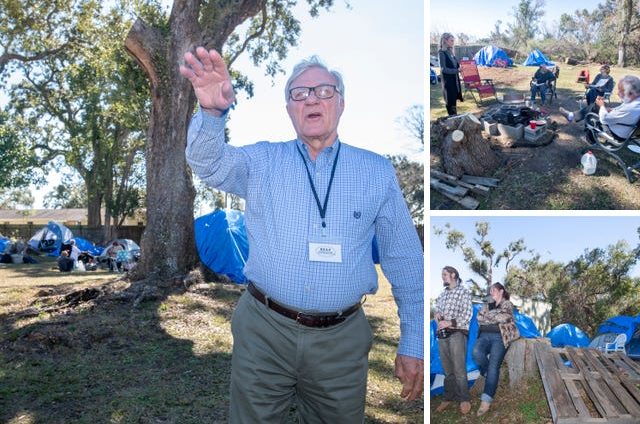 Although the encampment under Interstate 110 is now gone, work has not stopped to find the people who were camped under the interstate a better living situation.

At the Pathways For Change Clinton Cox residence property on West Moreno Street, volunteers and now residents were busy Wednesday arranging pallets for tent bases and clearing brush to arrange a new camp for homeless individuals.

The arrangement highlighted the coordination among Pensacola’s homeless care advocates that has come out of the Homelessness Reduction Task Force of Northwest Florida. Pathways For Change offered the property of Clinton Cox Residence, which has been closed since 2019 for construction defects, and REAP hired Johnson, whose advocacy on behalf many of the homeless individuals under I-110 has won their trust.

The camp on West Moreno Street is a temporary setup until REAP can open its Maxwell Respite Center at Palafox and Maxwell streets in mid-April, which will be funded by a portion of the $1.5 million in American Rescue Plan Act funding from the city of Pensacola.

“The concept is that you get those people that come in and they’re properly case managed,” Whibbs said. “With the proper case management, you can secure a stable source of income for them, help them get jobs and then use some of these other programs to actually get them into some kind of permanent housing.”

Currently, about 20 people are calling the camp home. Most of the people there came from the encampment under Interstate 110 that the city ordered vacated at the end of January. Another 20 people were staying in motel rooms in the area through REAP’s use of various grants.

EJ Petersen and Denise Woodard have become the “resident advisers” of the camp over the last week, helping others settle in.

The couple lived in the I-110 camp the entire year and Woodard gave birth to their son, who is now in state custody, while they called the camp home.

Woodard said staying at the I-110 camp was the best option they had at the time, but she didn’t ever really feel safe in the camp.

“Mostly people did leave us alone because we tried to stay to ourselves,” Woodard said, though she noted they did have things stolen from them.

She said she already feels much more secure at the new location.

Both hope the REAP program can get them into a permanent housing situation and a position where they can win back custody of their child.

Petersen’s only source of income for the last year has been donating plasma. He said already he’s been able to get a new copy of his Social Security card and is working on obtaining other legal documents needed to qualify for assistance programs.

“It’s a slow process but it’s moving along,” Petersen said.

REAP got its start in 2013 focusing on reducing recidivism of formerly incarcerated people and has helped more than 1,100 people find permanent housing.

Whibbs said REAP started working to help homeless individuals last year because it believes it had built experience helping get people back on the feet. REAP was awarded funding by Opening Doors Northwest Florida and it started its homeless program.

“It has evolved over the last year and a half. In July, we opened up The Lodges, which is a 52-bed facility that we lease from the Salvation Army,” Whibbs said. “At any given time, we got about 45 to 50 women and children that are that are housed in a facility.”

It was a year ago when a small camp of homeless people under Interstate 110 became the focus of the city. After the City Council passed a moratorium on removing anyone from the camp, Pensacola Mayor Grover Robinson proposed working with the Homeless Reduction Task Force of Northwest Florida to develop a better way to help homeless individuals.

The camp grew to more than 100 people at its height, and many residents near the camp became angry with the city over the whole situation.

Last fall, the council passed the $1.5 million package, and Robinson said the camp had to cleared by Jan. 31.

More than 70 people moved out of the camp, some finding other places to go, some reuniting with families and others entering a shelter or REAP’s program.

Whibbs said his impression was the last two weeks have been hectic and stressful for the people having to relocate.

“But I think from the overall perspective, most of what needed to be accomplished was accomplished,” Whibbs said.

This week, city workers were cleaning the camp site and sorting and storing anything that might be someone’s personal property in case they wanted to can claim it within 30 days of the closure.

Robinson touted the success of the relocation during his weekly press conference this week and said he believes it marks a new partnership with the city and local organizations.

“Last week, we moved over 70 individuals into a place that they all communicated was better than where they were,” Robinson said. “It wouldn’t have happened without the process we went through.”

Robinson said he also believes other local governments should join the city in funding these initiatives, and while he’s optimistic they will join eventually, he doesn’t think it will be soon.

“I think we have been successful,” Robinson said. “I don’t think we’ve been portrayed as successful.”

Escambia County commissioners said Thursday they want to hold a joint meeting with the City Council to discuss ways to improve services for the homeless.

“As we know that people have been moved from underneath the bridge, and been placed in different locations throughout our county, I think that it’s important that we begin to have a conversation with the city about real programs,” Commissioner Lumon May said. “Moving a problem doesn’t solve a problem.”

Commission Chairman Jeff Bergosh said he’s worried about what will happen when funding for the hotels runs out, and he doesn’t believe resources should be spent on people who don’t want help.

Commissioner Doug Underhill said he agreed with Bergosh and said he believes any program that helps homeless people should meet measurable performance metrics.

“They’re folks that were already in the homeless lifestyle and chose to come here, in part because we have so many services available to the homeless that are not tied to performance metrics and performance behaviors on the part of the recipient,” Underhill said. “It’s a basic of, you know, don’t feed the wild animals, because it makes them dependent upon the hand that feeds them.”

For the city’s part, Robinson said he believed assistance for the organizations that help homeless people should become a permanent part of the city’s budget.

“We now have some incredible partnerships that we didn’t have established very well before,” Robinson said. “What I continue to say is, if we work together collaboratively — the city and all these other organizations — we will be better.”