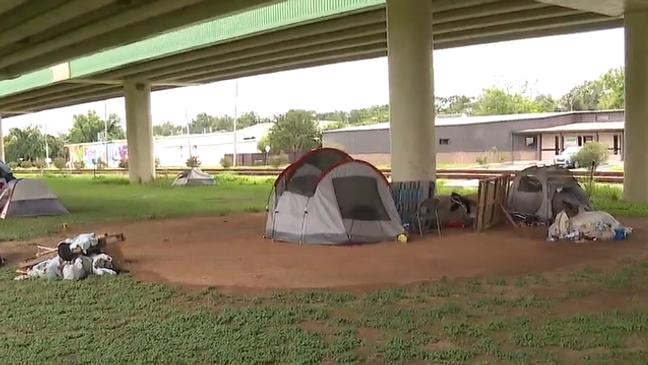 The clock is ticking as Pensacola City Council members are set to decide where the homeless community living under the I-110 overpass should go.

Channel 3 spoke to nearby residents about what they think of the proposed plans.

There is definitely mixed emotions about the situation but it’s safe to say many feel it is long overdue.

Channel 3 spoke to a woman who lives in a neighborhood close by. She says since the homeless community started pitching tents under the bridge, she hasn’t felt safe letting her children play at the nearby park.

For years, Angela Watts has lived right across the street from Long Hollow Park. The perfect spot for her kids.

“I was out here Thursday with my kids and there was a man passed out on the bench, zipper wide open,” Watts said. “My son doesn’t even want to come out to this park anymore.”

Watts says she has some relief knowing the homeless community will hopefully be relocated soon.

“If they are relocating them, it does not need to be next to a school or a park or a playground,” Watts said.

Mayor Grover Robinson says the council could make a decision on the three presented properties as early as Thanksgiving.

“This is going to be the council’s choice; the council can do whatever they want to do and obviously there’s going to be some fairly contentious issues that will be on the vote, and I have no idea what they’re going to approve,” Robinson said.

Mayor Robinson feels the first of the year is a more realistic goal.

“I’m proud at the fact that at least we tried,” Robinson said. “I mean show me another entity in a 150-mile radius that’s really trying to do something.”

Watts told Channel 3 that she does not have faith that the relocation will happen promptly.

The council is set to discuss the topic Wednesday at 5:30 p.m.

Stay with us as Channel 3 continues to follow this story.

This article is also published on Weartv.com