How Significant Is Pensacola’s Homelessness? Point-in-Time Survey Aims to Find Out 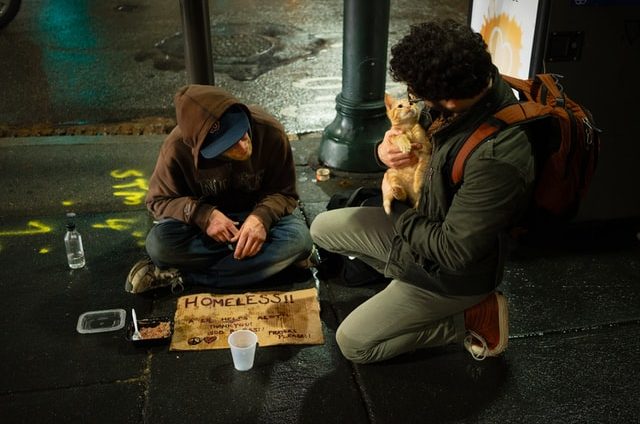 A group of homeless men trickled into the Serving the Hungry soup kitchen on Tarragona Street on Monday morning, huddling up inside to escape the frigid morning temperatures and to clean up, brush their teeth and start their day.

The soup kitchen is open twice a week to give out hot meals and connect those experiencing homelessness with supplies or resources they need, but Monday it also served as a place to collect data for a national homelessness census that can help drive state and federal funding to the area.

The national point-in-time homeless count is critical to nonprofits and homelessness agencies to understand the needs and demographics of an area’s homeless population, a venture that advocates say is especially critical this year as homelessness has grown so significantly in the Pensacola region.

It’s a 24-hour snapshot of who is attending drop-in centers and who’s on street corners, under bridges, in emergency or transitional shelters and in well-known established camps. This year’s count comes just a week before the deadline for city officials to close down the Hollice T. Williams park camp under Interstate 110 that has for the last year served as a makeshift homeless encampment allowed — but not regulated — by the city.

Mayor Grover Robinson said that city staff will work with local organizations to place everyone who wants to leave in a shelter, but after the 5 p.m. deadline Jan. 31, anyone left in the park will be trespassing. Since the announcement, staff from homeless agencies have been on site regularly trying to transition those who want help into alternative housing.

Opening Doors Northwest Florida Executive Director John Johnson said he expects this year’s count to be higher than previous because of how critical and visible the homelessness issue is, and because the 2021 count was modified and reduced due to COVID issues.

“We are seeing that we’re definitely getting more and more families that are reporting homelessness, for example, so this gives us an opportunity to actually document that,” he said. “We definitely expect an increase, especially because that moratorium on evictions has stopped and because we have such a housing crisis, we’re experiencing more and more families that are homeless.”

The documented number of people experiencing homelessness in the area declined steadily from 1,014 people in 2015 to 518 people in 2019, according to Opening Doors’ data. However, that number rebounded to 746 people in 2020.

How to help those who are already homeless, as well as those on the brink from becoming homeless, has been a priority conversation for government officials and nonprofit leaders for much of 2021.

The council recently approved spending $1.5 million in federal funds from the American Rescue Plan Act for the creation of additional homeless shelters and services in the city. Robinson said the new services created by the council funding will continue after the camp is cleared.

At the Serving the Hungry site Monday — one of many sites volunteers were stationed at throughout the day in Escambia and Santa Rosa counties — volunteer Gina Hertz was one of the first people approaching and surveying the men and women who came and went.

With our frigid weather I think, “Thank goodness I’ve got a home,” and I think, “How in the world, when it’s so cold, are they out there?” It breaks my heart.

A retired teacher, she said she’s not shy about talking to someone from any walk of life and has been looking for volunteering opportunities with the homeless after seeing the issue exacerbate recently.

Her first step was when she recently turned a $100 win on a scratch-off ticket into a stockpile of Dollar Tree food and supplies she delivered to the Epps Christian Center. She’s planning to find more ongoing opportunities to help.

“With our frigid weather I think, ‘Thank goodness I’ve got a home,’ and I think, ‘How in the world, when it’s so cold, are they out here?'” she said. “It breaks my heart. The homeless has had a spot in my heart, I see them and I thought, ‘Well, this is a good way to start, and I can go from there.'”

Johnson said even with the survey and completing the point-in-time count, it won’t be a full reflection of the homeless who are living in cars or without permanent housing, for example, but it’s a much clearer picture to help drive resources.

“Whether it’s emergency shelter, whether it’s affordable housing, whatever that picture looks like, we can respond, which is why it’s so critical to make sure we do this count accurately,” he said.