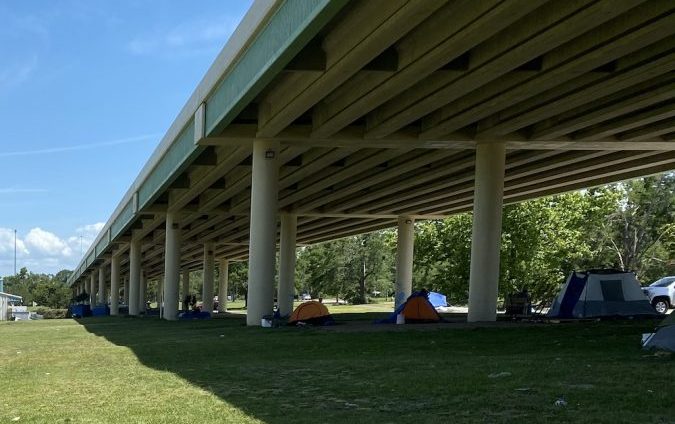 Homelessness comprises myriad issues beyond the lack of shelter. As such, there are just as many potential remedies. This week the Homeless Reduction Task Force of Northwest Florida will present to the Pensacola City Council a slate of recommendations to assist the homeless community.

The task force previewed its recommendations for the city council in September and then shored them up during a meeting in late October. City Council President Jared Moore skipped that final task force meeting on purpose. He wanted to let the group’s recommendations reach the council’s table organically and uninfluenced.

“I don’t need to shape it before it gets to me,” Moore told Inweekly recently.

City officials have requested the task force’s recommendations with the intention of potentially funding some of them with $3 million of American Rescue Plan Act funds. Moore expressed concerns that the lure of these federal dollars may be tainting the purity of this mission: “It’s almost like the city won the lottery, and we’ve had long lost family members coming out and saying, ‘yeah, we work this field.’”

“People are coming out of the woodwork for it,” she said. “But it’s not a lot of money when you look at what you have to do with it.”

Brahier is also concerned that charging the task force with presenting recommendations with the potential of funding them may have distracted the group—made up of various service providers and interested parties—from its original mission of digging into the area’s homeless landscape to collect the data necessary to guide future decisions, funding and services.

“They’re such complicated issues and there’s such a rush to get this money dispersed among people,” Brahier said, wondering if there “wasn’t enough fact-finding done.”

Mike Kimbrel, director of the Alfred Washburn Center and task force sub-committee member, believes this is the case. Before being approached by the city, he said, the group felt geared more toward data collection.

“And then $3 million hits the table, and all that went out the window,” Kimbrel said. “We went from collecting data on this community to ‘how do we spend this money?’”

That said, Kimbrel said he generally supports some of the task force’s recommendations. In particular, he likes the notion that Vinnie Whibbs of ReEntry Alliance Pensacola, of REAP, has put forward of establishing a handful of campground-type properties in the area, some with temporary shelters; Kimbrel has long operated Satoshi Forest, a like-minded camping operation that Escambia County fought for years.

“Naturally, I’m a supporter of campgrounds, but I think they’re a hot-button issue. No one wants them in their area. And I think the task force is too rushed — they’re probably going to shoot themselves in the foot,” Kimbrel said, noting that at least Whibbs was tweaking the vernacular and avoiding words like “campground” or “shelter”: “I did like that Vinney’s calling SOS, safe outdoor spaces. He’s kind of getting it.”

This issue of encountering resistance in whatever area a property servicing the homeless is established has become a problem for a growing encampment under the Interstate 110 overpass near downtown Pensacola. Moving that encampment — which the city is allowing to continue as it attempts to figure out how to place the campers in shelters or housing — is among the aims of these recommendations and the federal funds.

Task force head Connie Bookman, who operates Pathways for Change, has predicted that the encampment can be cleared by Thanksgiving. Mayor Grover Robinson has set his sights on January. But Councilwoman Brahier isn’t sure relocating the camp is the best idea.

“I don’t know if relocating the homeless encampment is benefiting anybody,” Brahier said.

The councilwoman acknowledges that the city has gotten quite a bit of negative feedback from residents living close to the encampment—“we’re getting emails left and right”—but said that’s going to be the case anywhere.

“For me to even remotely pretend that I have a better idea—I don’t. I’m just not sure anyone does,” the councilwoman said.

Kimbrel said he thinks the campground has well outgrown a manageable size, describing it as the “wild, wild west.”

For an example of a better, more manageable scene, he points to the outdoor space at the Alfred Washburn Center, where individuals can find coffee, pastries and picnic tables to sit and rest and think.

“Just kind of get their heads together — how are they getting out of this situation? What are their next steps? Just a place to decompress,” Kimbrel said.

Under the I-110 overpass a few days ahead of the task forces’ delivery of its recommendations to the council, a young couple sat among a collection of tents and scattered belongings. In early November, the couple had a baby. Their baby’s delivery date and time are written in marker on one of the tents: “11-3 @ 2:49 a.m.”

“Because we’re in this situation, the state has her right now,” said the woman, who goes by ‘D.’

“It wouldn’t be appropriate for a child to be out here,” said ‘Neo,’ the baby’s father, adding that the couple both have fast-food jobs lined up.

The couple said that a woman with a local service organization had assured them that they would be in housing before the baby was born. The experience has soured them on any progress the city might be about to make.

Considering his own recommendation to the city, if he were to make one, Neo aims for simplicity: give the homeless houses.

“They do have housing. Houses that are abandoned and not used,” he said. “they could always put people in them. Just to get people on their feet.”

That’s not likely to happen. Finding properties for those campgrounds will be tricky enough. Whatever happens, the ensuing discussion when the city council receives the task force’s recommendations will be pretty interesting.

“I think Wednesday is going to be a complete shitshow,” Kimbrel predicted. “From what I can gather, it’s all over the place.”

— For more on this issue, check out this week’s Inweekly.

This article may also be found on Rick’s Blog