A Roof Over Their Head: Churches Use Tiny Homes for Homeless 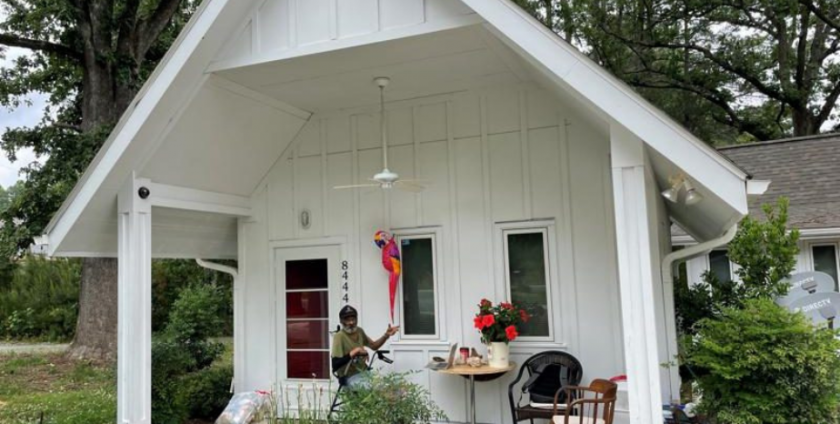 Churches across the U.S. are tackling the big question of how to address homelessness in their communities with a small solution: tiny homes.

On vacant plots near their parking lots and steepled sanctuaries, congregations are building everything from fixed and fully contained micro homes to petite, moveable cabins, and several other styles of small-footprint dwellings in between.

Church leaders are not just trying to be more neighborly. The drive to provide shelter is rooted in their beliefs — they must care for the vulnerable, especially those without homes.

“It’s just such an integral part of who we are as a people of faith,” said the Rev. Lisa Fischbeck, former Episcopal vicar and the board chair of Pee Wee Homes, an affordable housing organization building tiny abodes in Chapel Hill, North Carolina.

Fischbeck led the Episcopal Church of the Advocate when it added three one-bedroom units on its 15-acre campus. The first residents, including the organization’s namesake, Nathaniel “Pee Wee” Lee, moved into them in June 2019.

Before that Lee, 78, had spent years sleeping in alleys, cardboard shelters and cars after medical issues ended his masonry career. Today he enjoys watching TV in his home, growing tomatoes and fishing in the nearby pond.

“I thank the Lord because this is mine and nobody can run me out,” Lee said, breaking out in laughter as he sat on the porch of his little white house.

Fischbeck said tiny homes can fit nearly anywhere, and an advantage to building them on church properties is they already have electricity, water and other infrastructure in place.

“I just feel so passionately that churches have space,” she said. “Just consider it. It’s a dire need.”

The embrace of tiny homes as housing solutions can be found in both sacred and secular spaces. Within the Christian sphere, their use spans denominations. Often the tiny homes projects build on related ministries such as providing parking space for people living in their cars. Beneficiaries are generally welcome to attend worship services but not required to do so.

Some churches’ projects are already up and running, while others are still working toward move-in day, like the Church of the Nazarene congregation in St. Paul, Minnesota, which is assembling a tiny house community for chronically homeless people with local nonprofit Settled.

“We do not have a lot of property,” said Jeff O’Rourke, lead pastor of Mosaic Christian Community in St. Paul. “We have just strived to use every square inch of property that we have to be hospitable.”

This spring in El Cajon, California, Meridian Baptist partnered with local nonprofit Amikas to begin building emergency sleeping cabins on a slice of its property that Rolland Slade, the church’s pastor, said is usually unoccupied except by tumbleweeds.

Mothers with children — a hard-to-shelter demographic — can stay for 90 days and be connected with the city’s housing safety net for more permanent options. Bathrooms and a communal kitchen are in a nearby church building.

“Folks have said to me that six cabins are not going to make a difference, and I wholeheartedly disagree,” Slade said. “We’ll make the difference for at least six women. If they each have a child, that’ll be six children.”

For help with construction, operation and dealing with bureaucratic hurdles, churches often turn to community organizations like Amikas, Pee Wee Homes and Settled.

Firm Foundation Community Housing, in the San Francisco Bay Area, is another. It was launched by the Rev. Jake Medcalf, the former lead pastor of First Presbyterian Church of Hayward, when the congregation built transitional tiny housing in its parking lot.

Houses of worship not only have land to spare, Medcalf said, but are positioned to “provide community in a way that really is humanizing and is a part of anybody’s basic healing and recovery.”

In 2020, First Christian Church of Tacoma in Washington state became a host site for a tiny home community set up by the nonprofit Low Income Housing Institute. The nonprofit operates the village, allowing the congregation to contribute without overextending itself.

“We don’t have a lot of money. We don’t have a whole lot of people … but we care a lot about it, and we’ve got this piece of property,” said the Rev. Doug Collins, the church’s senior minister.

Not everyone welcomes these projects into their neighborhoods. In Nashville, Tennessee, plans to put up tiny homes by Glencliff United Methodist Church prompted backlash and a lawsuit by some neighbors. Ultimately the Village at Glencliff prevailed, and today an arc of multicolored micro homes greet congregants as they pull into the church’s driveway.

It specializes in helping people with medical issues, like William “Green Bay” Scribner, 37, who spent seven months recuperating there. Not only was he able to leave in better health, he said, village staff helped him land a more permanent apartment where he can host his young daughter overnight.

For people with medical vulnerabilities like Scribner, “housing is lifesaving,” said the Rev. Ingrid McIntyre, a United Methodist minister and village founder.

A nationwide survey, the last conducted without being impacted by the pandemic, found that about 580,000 people were homeless on a night in January 2020, according to the Department of Housing and Urban Development’s Annual Homeless Assessment Report to Congress. The number, based on point-in-time counts, rose for the fourth year.

So the tiny home movement on its own is too small to fix the whole problem, said Marybeth Shinn, a Vanderbilt University professor who has studied homelessness for decades. It would be hard to scale up to meet the overwhelming demand.

“It’s good to help some people, but we need to figure out solutions that are going to help many more,” Shinn said.

Donald Whitehead, director of the National Coalition for the Homeless, said he supports churches using their spare space to help homeless people and sees tiny homes as a great emergency option, but added that homeless people deserve standard-size housing like everyone else.

“It can be included in a menu of resources that would help to address homelessness,” Whitehead said. “If there’s an opportunity to build a regular home at the same price, we would prefer that people build the regular home.”

Months after a deadly December tornado ripped through Mayfield, Kentucky, some renters were still displaced. Bread of Life Humanitarian Effort, a Churches of Christ nonprofit, stepped in to help.

With buy-in from Mayfield congregations, the nonprofit used donations that were pouring in and started putting up tiny homes wherever they could secure permission — including next to Northside Church of Christ.

“You’ve got people that are hurting,” said Joel Crider, Bread of Life’s treasurer. “It’s our Christian duty to look out for them.”